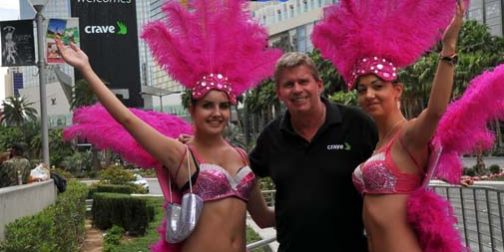 Crave Interactive, the UK-based tech developer of in-room tablets for hotels, has announced a major step in its global expansion with the opening of an office in Las Vegas.

The launch of the new US base follows the recent installation of Crave’s in-room tablets at the ARIA Resort & Casino on the Las Vegas Strip, plus a rush of other signings in the US, Latin America and the Caribbean. The company has also recruited a new US-based Sales Director, the highly experienced Jeff Aguiar, who will focus on the East Coast US marketplace.

According to Crave Founder and CEO, Gareth Hughes, the firm foothold that the company – which is headquartered in Milton Keynes in the UK – has now established in the US reflects the enthusiasm of the international hotel industry for its innovative technology.

“Crave is fast becoming the global market leader in providing the sort of guest-facing digital technology which is rapidly becoming an essential element of high-end hospitality. Our new Las Vegas office will further fuel our expansion in the Americas,” he said.

Crave’s in-room tablets, powered by the company’s unique proprietary operating system, Crave OS, replace printed room service menus, directories and telephone ordering with instant ordering from limitless and instantly updateable digital menus. The tablets also include endless opportunities for tailored guest communications, push-messaging, personal advertising, and all manner of additional features, from unique local travel guides to global news and gaming, as well as the possibility for full integration with other in-room tech such as lighting and automatic drapes.

Crucially, as well as having its own operating system, Crave also has its own custom-made device, the Crave T2, the second-generation version of the Crave Tablet, the world’s first tablet designed specifically for use in hotel rooms. It comes with a raft of features crafted to meet guest and management needs, including a practical docking system. According to Gareth Hughes this unique offer has been vital in establishing Crave’s increasing dominance of the in-room tablet market worldwide.

“We’ve developed a complete hardware and software solution that is uniquely designed for the hotel environment. This allows us to create stunning solutions that are super fast and intuitive to use. Crave provides the guest interface to everything in a way that delights guests – something regularly attested by comments about the Crave Tablets on TripAdvisor from guests at the ARIA,” he said.

As well as the flagship installation at the ARIA, Crave’s international presence has grown dramatically in recent months, with its in-room tablets now installed in the prestigious Montage Beverly Hills in Los Angeles, Mayton Inn North Carolina, and with further installations in Costa Rica, Panama, Mexico and St Lucia. Particularly significant has been the recent decision of the high-end resort operator AMResorts to make Crave Tablets a standard feature of all new resorts under its exclusive Secrets, Breathless and Zoetry brands.

Crave’s Commercial Director, Tim Butterworth, said that the rush of international signings in recent months have been a major milestone for the company.

“The last year has been a real watershed, both for Crave’s expansion as a business, and for the developing importance of in-room tablet-based technology in general. There seems to have been a sudden realization across the luxury hospitality sector that this sort of tech is well on its way to becoming a standard guest requirement. The fact that we’ve been around for since the very start, developing our unique systems and technology with longstanding clients in the UK, means that we’re way ahead of the curve,” Tim Butterworth said.