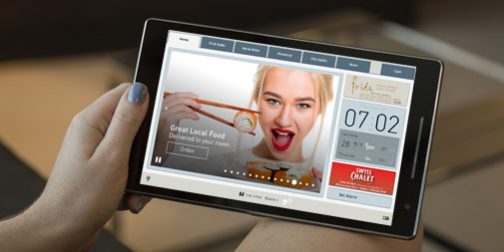 LAS VEGAS – 17th JUNE 2016. Global hospitality tech innovator Crave Interactive is set to unveil its game-changing new T-mini tablet at HITEC 2016 in New Orleans, June 20–23. The product is a radical new offering from the company, which already sets the standards for guest-facing digital technology in the luxury sector worldwide, and which is now making in-room tablets accessible to hotels across midscale and economy too.

“The T-mini will totally revolutionize what’s possible in terms of guest technology for hotels in the midscale and economy sectors,” said Crave Founder and CEO, Gareth Hughes. “Our vision has always been to see guests using Crave’s tablets everywhere from the most luxurious suites in the most exclusive resorts, to rooms in limited service economy hotels, and the addition of T-mini to our range will make that possible.”

AFFORDABLE FOR ALL HOTELS

The 8” Crave T-mini is designed specifically to make in-room tablet solutions affordable and practicable for midscale and economy hotels, with a robust and highly functional design in terms of both hardware and software. With pricing that is unrivalled for the functionality offered, this revolutionary product:

The launch of the T-mini builds on Crave Interactive’s formidable track record with the T2, the second generation of its groundbreaking Crave Tablet, the world’s first tablet designed specifically for use in hotel rooms.

The Crave T-mini is highly specified with a quad-core processor, a superb 8 inch 1280 × 800 touch screen, and 5GHz as well as 2.4GHz WiFi. It has no camera, and no external data inputs – a locked down, fit for purpose hotel solution.

AHEAD OF THE CURVE IN THE IN-ROOM TABLET MARKET

Crave is already firmly established at the leading edge of hospitality tech in the luxury market, thanks to such milestones as its partnership with ARIA Resort & Casino in Las Vegas, which features T2 tablets in all of its 4,004 guest rooms.

But according to Gareth Hughes the focus on the high-end market during the earlier development of in-room tablets meant that the midscale and economy hotels were not provided for – until now.

“At the start of this digital revolution in the industry, in-room tablets were very much seen as something for the highest end of the market,” he said.

“In creating our earlier tablets and the unique proprietary software platform that powers them, the focus was on the sort of places every guest need is catered for, so we worked on allowing limitless possibilities for interactive menus and instant communications, and total integration with other in-room tech.

“Because of the extraordinary levels of guest engagement with the devices, and the vast scope for upselling, the tablets have invariably provided a significant return on investment for the properties that have installed them. But because they are fundamentally a luxury product they just haven’t been a realistic option for operators in the midscale and economy sectors. That’s something we’ve always wanted to change, and that’s exactly what the T-mini is all about.”

A PRODUCT BUILT ON YEARS OF EXPERIENCE

According to Gareth Hughes, Crave has been able to work closely with its manufacturing partner to craft a low cost tablet which replicates the most essential elements of its more sophisticated luxury product.

“We moved from delivering in-room digital solutions through consumer model products to creating our own hardware long before any of our competitors, and that deep expertise has allowed us to make the T-mini a highly effective product,” he said.

With guests across all hotel markets increasingly expecting to find digital technology in their rooms, the midscale and economy market has been eager to move away from printed directories and clock radios – outdated relics from a previous century. The initial costs of installing earlier tablet-based systems, however, have hampered mass market moves toward in-room digitization, with affordable options mainly limited to apps delivered through guests’ own devices – a solution which has proved singularly ineffective according to Gareth Hughes.

“We know from first-hand experience that guest interaction with mobile hotel apps is pitiful compared to engagement with in-room tablets – it’s very hard work for a hotel to get to 5% of guests engaging with their mobile App, while our in-room tablets achieve 95% guest engagement, with an average of over 50 pages viewed per occupied room night,” he said. “With the T-mini hotels everywhere will be able to take their digital strategies in terms of guest service and engagement to an entirely new level.”

Insider buzz around the upcoming launch of the T-mini has already generated significant interest, but the official unveiling will come at HITEC 2016, the world’s largest hospitality technology show, which this year takes place in New Orleans from June 20–23. Crave’s Chief Commercial Officer, Tim Butterworth, said that the company caused a stir with the launch of the T2 at HITEC 2015 and is delighted to be repeating this by introducing the T-mini to the world at this year’s event.

“We’ve been breaking new ground in hotel tablet technology right from the start, and it looks like we’re making the launch of a revolutionary new Crave product into an annual event!” he said, adding that orders for the new low-cost in-room tablets are now being taken for delivery in the final quarter of 2016.

Tim Butterworth said that even ahead of HITEC 2016, there had been a rush of enquiries about the new tablets. To make an appointment to see us email hitec@crave-emenu.com.

“Crave T-mini is the product the hotel industry has been waiting for,” he said. “We are already seeing huge interest from large groups, and I’m confident that when we look back, the launch of the T-mini will be a pivotal moment, not only for Crave but for the industry as a whole.”

Formed in 2009, UK-based Crave Interactive Ltd is the leading developer of guest-facing hotel tablets and app solutions. The company is a global market leader, with products and services available worldwide. Crave’s systems are powered by Crave Cloud, a sophisticated proprietary software platform that delivers excellent guest services via any device. To date over 1,250,000 items have been ordered via Crave Cloud. Crave in-room tablets provide a full range of guest services in a sleek and stylish manner. Crave solutions can replace paper directories, and increase revenues of in-house services, such as spa treatments, restaurant bookings and merchandise sales.