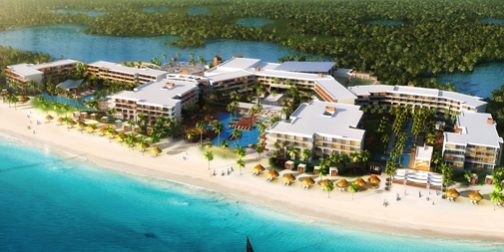 “This is part of an ongoing roll­out of Crave’s tablets at AMResorts properties,” Tim Butterworth said, adding that the resort brand management company has made the decision to include Crave tablets as a standard feature in all new resorts under its prestigious Zoëtry® Wellness & Spa Resorts, Secrets Resorts & Spas and Breathless Resorts & Spas brands.

The custom­-made Crave tablets are now featured in rooms at Secrets The Vine Cancun, Secrets Playa Mujeres Golf & Spa Resort and the recently opened Breathless Riviera Cancun Resort & Spa. The installations feature the Crave T2, the second generation of the ground­breaking Crave Tablet, the world’s first tablet designed specifically for use in hotel rooms. The tablets – powered by Crave’s unique proprietary operating system, Crave OS – allow resort operators to do away entirely with paper communications and room service menus, replacing them with instant ordering on remotely updated digital menus, spa and golf bookings, push messaging and direct communications between guests and staff when required. At the AMResorts properties, the tablets will also be used to provide daily resort news bulletins and to promote spa treatments, private dining and excursions.

The first Crave installations for AMResorts debuted at Secrets Papagayo Costa Rica and Breathless Cabo San Lucas Resort & Spa in late 2015, with further installations following in Mexico and Panama early in 2016. The company then announced that the tablets would appear in rooms at all of its new adultsonly properties within its rapidly expanding portfolio throughout Mexico, the Dominican Republic and Central America.

According to Baldemar Romo, Director of IT, International for AMResorts’ parent company, Apple Leisure Group, both staff and guest feedback has been excellent at all properties. “We were looking for a guest­facing technology solution that would fit the casual, yet sophisticated style of our Secrets and Breathless Resorts & Spas brands. Crave met those requirements perfectly, in terms of both guest experience and commercial potential. Since then, the response has been extremely positive. Guests love the simple and intuitive nature of the devices as well as the interactivity,” he said, adding that the non­package revenue­raising potential of the Crave system had also rapidly been confirmed.

Tim Butterworth said that the potential of the tablets was particularly obvious in all­-inclusive properties with a large array of on­-site services and activities.

“Crave has long experience working with hotels where there is a large suite of on­-site dining and spa services, and at the AMResorts properties, we’ve been able to promote their various guest services extremely effectively through our tailored advertising and push­messaging systems,” he said, adding that Crave had already developed a finely­honed 24­-hour international support system through its work with international hotel partners, as well as successful multi­lingual content delivery.